During the events of Skyrim, the true power of the Word Walls are revealed. Not only did they mark burial grounds, but existed to teach a Word of Power to those with the ability to learn.

Word Walls, whether inside Nordic tombs, Dragon Lairs or the like, should not be approached lightly, as they are nearly always guarded, with Dragons, Draugr and even Dragon Priest. Some word walls, such as Shearpoint, Arcwind Point and Saering's Watch, are particularly formidable, guarded by a combination of a Dragon and Draugr, with Shearpoint, for example, guarded by a Dragon and the Dragon Priest Krosis. It should be noted that not all word walls are guarded by Dragons or the undead, for example Sunderstone Gorge is inhabited by levelled mages, whilst Dead Crone Rock and Lost Valley Redoubt are populated by Forsworn and Hagravens, all of which are formidable enemies. 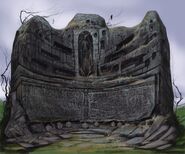 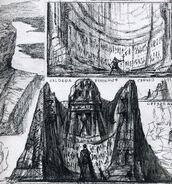 World Wall concept art.
Add a photo to this gallery