For other uses, see Wuuthrad.

"When Ysgramor awoke the next morning, Yngol presented him with a mighty axe, hewn from the sorrow that had laid him low just the night before. And the Harbinger of us all embraced his son. He cried out in joy, sadness, and rage. And there on the deck of the last ship from Saarthal, Ysgramor named his axe Wuuthrad, which means "Storm's Tears" in the language of Atmora."
―Anonymous[src]

Wuuthrad is a unique two-handed battleaxe that appears in The Elder Scrolls V: Skyrim.

It was originally wielded by Ysgramor, the legendary leader of the Five Hundred Companions, during the Nordic-Falmer War which took place across much of Skyrim and Solstheim in the Merethic Era. The weapon was later shattered into fragments, several of which are displayed in the Companions' mead hall of Jorrvaskr, until they were stolen by the Silver Hand during the Companions' questline.[1]

Wuuthrad was forged by Ysgramor's son, Yngol, the day after the Night of Tears. Legend has it that when Ysgramor left Saarthal, his tears of grief were made of pure ebony, which Yngol used to forge this axe. Yngol heated the tears with lightning and then cooled them in the ocean, and the result was a great axe forged from Ysgramor's own wrath and sorrow. Yngol gifted the axe to his father, who named it "Wuuthrad," meaning "Storm's Tears" in the Atmoran tongue. The axe was later enchanted by Ahzidal, who was one of the most powerful human enchanters since the Merethic Era.[2]

The weapon bears the inherent ability of dealing 1.2x damage to Altmer, Bosmer, Dunmer, and Falmer.

The effect is not considered an enchantment, so Wuuthrad is affected by the Elemental Fury shout. Additionally, it may be enchanted at an arcane enchanter to stack with its inherent ability, although the description "Especially deadly to Elves" will remain.

Wuuthrad is a two-handed battleaxe with blades on both sides. It has a long handle, ending in a sharp point at the top. It has a mostly grayish tone. It also features a screaming Elf on the head of the axe. The two ears of the elf are small and pressed close to the face.

Concept art of Wuuthrad and the Shield of Ysgramor

A statue of Ysgramor, wielding Wuuthrad 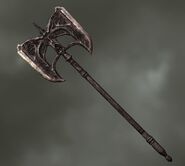 The Elf-Grinder
Add a photo to this gallery

See more discussions >
Retrieved from "https://elderscrolls.fandom.com/wiki/Wuuthrad_(Skyrim)?oldid=2940624"
*Disclosure: Some of the links above are affiliate links, meaning, at no additional cost to you, Fandom will earn a commission if you click through and make a purchase. Community content is available under CC-BY-SA unless otherwise noted.