For other uses, see Ysgramor (Disambiguation).

Ysgramor, also referred to as Ysgramoor[1] or Ysgrim,[UL 1] was an Atmoran warrior and the leader of the Five Hundred Companions. He is one of the most legendary heroes of Men, who played a pivotal role in the ascendancy of humans on the continent of Tamriel in the late Merethic Era, during the period known as The Return.[2]

Ysgramor is also considered the first human historian, as he developed a runic transcription of Nordic speech based on Elven principles.[3] Ysgramor's lasting influence on human history across Tamriel earned him such sobriquets as the "First Man," the "Bringer of Words," and "Harbinger of Us All" in bardic tradition and the accounts of historians.[4][2]

"Out of this time also rose one of the most legendary of all Tamrielic figures, Ysgramor, from whom all Nordic kings to this day are descended."
―Pocket Guide to the Empire, Third Edition: Skyrim

Ysgramor was fleeing from a civil war that had broken out in his homeland, the continent of Atmora. He and his two sons, Yngol and Ylgar, arrived at Hsaarik Head, located on the Broken Cape.[5] Ysgramor sought no violence; he was a peaceful settler and wanted to explore these new lands. The newfound continent of Tamriel was named Mereth by the Atmorans, after the strange inhabitants who called themselves "Mer".[4]

Many Atmoran settlers followed Ysgramor's example and came to Mereth to escape the civil war. Soon, the human population of Tamriel was large enough that they began to build cities, and thus Saarthal was made. However, due to this population boom, the Mer felt endangered and decided to raid human settlements. Almost all of the men were slain in a single night; only Ysgramor and his sons were known to have escaped. They took the last longboat and sailed back to Atmora. This night later became known as the Night of Tears.[6][7]

After Ysgramor reached Atmora, he found out that the civil war had ended. He told stories of the treacherous elves and all the brothers and sisters who were slain in their raid upon Saarthal. Soon enough, there was a whole army ready to fight and avenge the victims of the elves.[4] This army became known as the Five Hundred Companions. Thus began a period known as The Return.[8]

On the day known as the Day of Final Passage, Ysgramor and his Five Hundred Companions set sail for Mereth from the massive shipyards of Jylkurfyk. Ysgramor himself commanded a longboat by the name of Ylgermet.[9] Both of his sons had earned their places as renowned warriors and had taken two longboats under their command as well, Harakk and Darumzu.[9]

However, during their voyage to Hsaarik, the fleet was hit by the Storm of Separation. Both of his sons were separated from the rest of the fleet, and only the youngest, Ylgar, sailed out of it alive. It is said that Ysgramor was enraged by this. He went out in the storm alone to seek Yngol but failed. By the time Ysgramor found the shipwreck of Harakk, Yngol and his crew were already slain by the sea-ghosts. Ysgramor is said to have hunted and burned the ghosts in their honor afterwards. Ysgramor buried his son by the Atmoran traditions within a barrow. The barrow became known by the name of Yngol Barrow and played a role in later events.[9]

After the Five Hundred had reached Hsaarik Head, they sought to reclaim Saarthal from elvenkind. Shortly after landing, Ysgramor and his companions started marching towards the city, but before they reached it, a man skilled in the ways of magic approached them. The man, calling himself Ahzidal, was a fellow survivor of the fall of Saarthal, who had heard of Ysgramor and his companions' goal. Ahzidal himself was bent on revenge upon the Elves, as he had himself lost his family in the attack on the city, and had since wandered Tamriel and studied many kinds of powerful magic knowledge to find a way to get an edge over them. Finding that their goals overlapped, Ahzidal offered to share the gifts of his learnings with Ysgramor and his army to help them against the Elves, and Ysgramor accepted the offer. Ahzidal then went to work, bestowing powerful enchantments on all of the warrior's steel weapons.[10]

Empowered by Ahzidal's enchantments, Ysgramor and his companions started their fight with the elves in earnest. During their battle, many of their shield-brothers fell, but the army kept the name in honor of the fallen warriors. After reclaiming Saarthal, the Circle of Captains was assembled, where it was decided that every captain and his crew should make their own paths and separate.[11] Thus began the great expansion of Men on Tamriel and the genocidal slaughter of the elves. The Five Hundred were known to have spread from mountainous Skyrim to far southern marshes of Black Marsh and even to the isle of Solstheim.[12]

Ysgramor and his crew, with the help of Kaal Kaaz and Sadon Reyth, fought the elves in the area later named Eastmarch. Ysgramor stumbled upon his recently dead son's grave once more, and, in grief, decided to build a great city where the nearby river met the sea. It was to serve as a monument for mankind. The city was built by elven slaves in Atmoran fashion. It was made as an impenetrable fortress. Ysgramor commanded that a great bridge be built over the White River, so no elf could attempt to sneak over and avenge his kin. A great palace was built that served as the seat of kings for many generations after Ysgramor himself. It is said that deep underneath Windhelm, a huge crypt was built to be worthy for legendary Ysgramor himself.[9]

Sometime later Ysgramor and his companions went to war with the giants. In the end, their most challenging enemy was Sinmur, a giant who had already killed some of the companions such as Hakra. After going to his barrow, Ysgramor destroyed the giant's club with Wuuthrad and killed the giant.[13]

News of Ysgramor's final breath went over Tamriel like a huge dark cloud. It is said that even the fiercest of warriors put down their mighty axes, and in grief swore never to pick them up again.[8] The death of Ysgramor ended the period of the Return. Most of the Five Hundred had settled. It is from them, that most modern Tamrielic human races had evolved.[14]

Despite the crypt that had been already built for him in Windhelm, Ysgramor chose to be buried on the coast of the Sea of Ghosts, looking in the direction of his birthplace, Atmora.[9] Ysgramor's Tomb is located north-west of Winterhold. 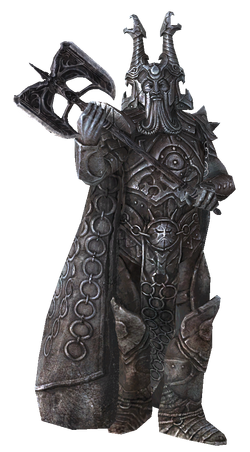 Ysgramor was the founder of great factions, such as the Companions and the First Empire, beginning the Ysgramor Dynasty. It would last until the death of King Borgas in 1E 369.[15]

Due to the actions of Ysgramor, the race of Snow Elves was banished underground, only to emerge some thousands of years later as beastfolk known as the Falmer. Some believe that the Falmer still hold a grudge against humanity and the day will come when they will attempt to reconquer the land that once belonged to them.[16]

Many legends exist about Ysgramor avoiding the tricks of the Daedric Prince Herma-Mora.[17]

In 2E 582, the Vestige was assisted by the spirits of Ysgramor, along with his sons Yngol and Ylgar, in banishing the newly resurrected spirit of the giant Sinmur.[18]

In 4E 201, the Last Dragonborn met Ysgramor when they entered the Hall of Valor in search of help in defeating Alduin as they delved into the realm of Sovngarde in their pursuit of defeating the Dragon.[19]

Ysgramor had only two sons. His elder son, Yngol, was killed by Sea-Ghosts in the Storm of Separation and thus never settled in Mereth to have a family of his own. His youngest son, Ylgar, did survive the Nordic-Falmer War and had descendants of his own.[4] It is said that all Nordic Kings are descended from Ysgramor as well.[20]

Notice: The following are unlicensed references. They are not copyrighted by a ZeniMax Media company, but can still be considered part of The Elder Scrolls lore and are included for completeness.
Čeština Deutsch Español Suomi Français Italiano Polski Русский Українська
*Disclosure: Some of the links above are affiliate links, meaning, at no additional cost to you, Fandom will earn a commission if you click through and make a purchase. Community content is available under CC-BY-SA unless otherwise noted.
Advertisement