The Magister Makes a Move

For other uses, see Zalkin-Sul Egg Mine.

"Kwama Warriors protect the colony, reacting quickly to any percieved danger. They should be treated warily and with respect, for they are aggressive and highly dangerous."
―Dorayn Redas, Kwama Keeper, Zalkin-Sul Egg Mine Loading Screen

Zainkin-Sul Egg Mine is a location in the region of Vvardenfell. It is run by Magister Otheri,[1] and can be found by traveling north from Nchuleftingth Wayshrine. If discovered, the characters will increase the Vestige's bounty.

The Magister Makes a MoveEdit 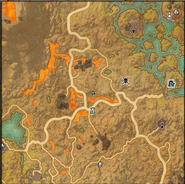 Exit location map
Add a photo to this gallery

Retrieved from "https://elderscrolls.fandom.com/wiki/Zalkin-Sul_Egg_Mine_(Online)?oldid=2926068"
Community content is available under CC-BY-SA unless otherwise noted.