For other uses, see Zombie.
Not to be confused with Draugr.

"These undead are dangerous indeed, for they have with them the curse of their deaths. Those who are struck by a zombie have a chance of getting a rotting disease, which will slowly but surely eat away at their health, eventually turning the hapless victim into a zombie also."
―Official Arena Game Guide.[UL 1]

Zombies are undead creatures encountered in The Elder Scrolls: Arena. 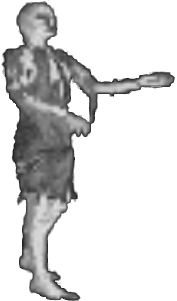 Zombies are the revived remains of dead humanoids, normally used by mages to guard locations or resuscitated by other means. They appear as decadent greyish corpses wearing tattered clothes.

These undead are encountered in dungeons and crypts, attacking any intruder who enters their lair. It is possible to identify Zombies by their moan—the lowest from all the undead.

Zombies are a typical medium level opponent: fairly dangerous when firstly encountered, but negligible at higher levels. Zombies deal great damage at close distance, however they do not possess any ranged attacks. Beyond their natural strength, Zombies also can transmit diseases—which will slowly kill the victim.

Zombies are between Ghosts and Trolls in terms of strength. They are encountered for the first time during the quest "Elden Grove," in the location of same name.

Notice: The following are unlicensed references. They are not copyrighted by a ZeniMax Media company, but can still be considered part of The Elder Scrolls lore and are included for completeness.
Retrieved from "https://elderscrolls.fandom.com/wiki/Zombie_(Arena)?oldid=2959146"
*Disclosure: Some of the links above are affiliate links, meaning, at no additional cost to you, Fandom will earn a commission if you click through and make a purchase. Community content is available under CC-BY-SA unless otherwise noted.