"I don't like to think about zombies. Missing arms, legs, heads. They smell awful, and they're hard to kill."
―Rumors[src]

For other uses, see Zombie.
Not to be confused with Draugr.

Zombies are undead bodies resurrected by an unnatural spirit or necromancer. They are found in dark underground places, such as sewers and caves, and can also be found in graveyards. When slain, a zombie corpse may yield up mort flesh, which can be used as an alchemy ingredient.

They are simple corpses filled with evil power to mindlessly do the bidding of their master. Sometimes zombies that were slaves of something are freed from the magical bonds binding them. These free zombies usually walk around, moaning and attacking nearby living creatures.

In appearance, Zombies are naked, rotting bodies displaying serious wounds. All Zombies have mottled, dark green flesh with bones poking through, purple tongues and are commonly missing an arm or even a head.

They are aggressive and can be quick when they want to. Zombies make disturbing groans and grunts when they detect prey. Once they get about 20–30 feet away, they start to sprint at the Hero with a charging hit that knocks its target back several feet.

The dread zombie has the ability to quickly regain health, perform powerful attacks and defend itself. Dread Zombies can kill guards and other powerful entities, earning this foe a reputation as one of the hardest enemies to kill. 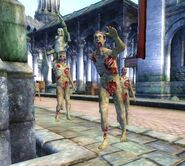 Retrieved from "https://elderscrolls.fandom.com/wiki/Zombie_(Oblivion)?oldid=3056477"
*Disclosure: Some of the links above are affiliate links, meaning, at no additional cost to you, Fandom will earn a commission if you click through and make a purchase. Community content is available under CC-BY-SA unless otherwise noted.